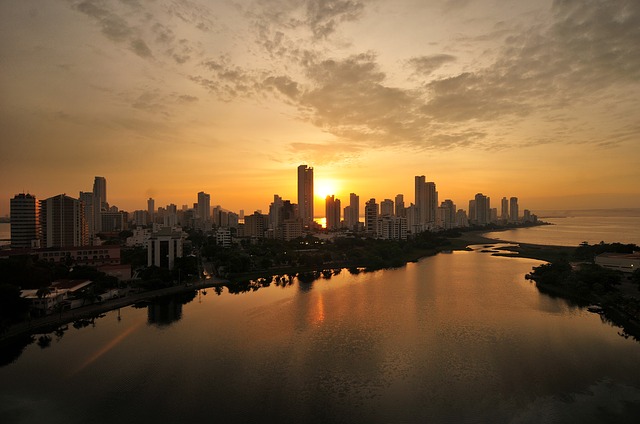 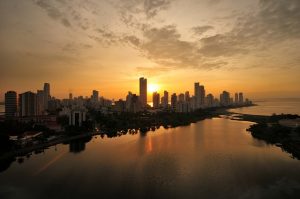 The city of Cartagena (Spanish: Cartagena de Indias), is a port located on the northern coast of Colombia in the Caribbean Coast Region; it is the capital of the Bolívar Department, and had a population 971,592 as of 2016.[2] It is the fifth-largest city in Colombia and the second largest in the region, after Barranquilla. The urban area of Cartagena is also the fifth-largest urban area in the country. Economic activities include the maritime and petrochemicals industries, as well as tourism.

The city was founded on June 1, 1533, and named after Cartagena, Spain, which in turn was named after Carthage in Tunisia. Settlement in the region around Cartagena Bay by various indigenous people dates back to 4000 BC. During the Spanish colonial period Cartagena served a key role in administration and expansion of the Spanish empire. It was a center of political and economic activity due to the presence of royalty and wealthy viceroys. In 1984, Cartagena’s colonial walled city and fortress were designated a UNESCO World Heritage Site.

The metropolitan area of Cartagena is formed by:

In this area is the Rafael Núñez International Airport, located in the neighborhood of Crespo, ten minutes’ drive from downtown or the old part of the city and fifteen minutes away from the modern area. Zona Norte, the area located immediately north of the airport contains the Hotel Las Americas, the urban development office of Barcelona de Indias, and several educational institutions.[citation needed]

The Downtown area of Cartagena has varied architecture, mainly a colonial style, but republican and Italian style buildings, such as the Cathedral’s bell tower, can be seen.

The main entrance to downtown is the Puerta del Reloj (Clock Gate), which exits onto the Plaza de los Coches (Square of the Carriages). A few steps farther is the Plaza de la Aduana (Customs Square), next to the mayor’s office. Nearby is San Pedro Claver Square and the church also named for Saint Peter Claver, where the body of the Jesuit saint (‘Saint of the African slaves’) is kept in a casket, as well as the Museum of Modern Art.

Nearby is the Plaza de Bolívar (Bolívar’s Square) and the Palace of Inquisition. Plaza de Bolívar (formerly known as Plaza de La Inquisicion) is essentially a small park with a statue of Simón Bolívar in the center. This plaza is surrounded by balconied colonial buildings. Shaded outdoor cafes line the street. 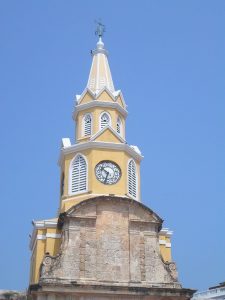 The Office of Historical Archives devoted to Cartagena’s history is not far away. Next to the archives is the Government Palace, the office building of the Governor of the Department of Bolivar. Across from the palace is the Cathedral of Cartagena, which dates back to the 16th century.

Another religious building of significance is the Iglesia de Santo Domingo in front of Plaza Santo Domingo (Santo Domingo Square). In the square is the sculpture Mujer Reclinada (“Reclining Woman”), a gift from the notable Colombian artist Fernando Botero. Nearby is the Tcherassi Hotel, a 250-year-old colonial mansion renovated by designer Silvia Tcherassi.

In the city is the Augustinian Fathers Convent and the University of Cartagena. This university is a center of higher education opened to the public in the late 19th century. The Claustro de Santa Teresa (Saint Theresa Cloister), which has been remodeled and has become a hotel operated by Charleston Hotels. It has its own square, protected by the San Francisco Bastion.

A 20-minute walk from downtown is the Castillo de San Felipe de Barajas, located in el Pie de la Popa (another neighborhood), the greatest fortress ever built by the Spaniards in their colonies. The tunnels were all constructed in such a way as to make it possible to hear footsteps of an approaching enemy. Some of the tunnels are open for viewing today.

San Diego was named after the local San Diego Convent, now known as the Beaux Arts University Building. In front of it is the Convent of the Nuns of the Order of Saint Clare, now the Hotel Santa Clara. In the surrounding area is Santo Toribio Church, the last church built in the Walled City. Next to it is Fernández de Madrid Square, honoring Cartagena’s hero, José Fernández de Madrid, whose statue can be seen nearby.

Inside the Old City[clarification needed] is found Las Bóvedas (The Vaults), a construction attached to the walls of the Santa Catalina Fortress. From the top of this construction the Caribbean Sea is visible.

A view of the both Colonial and traditional neighbourhood of Getsemaní, usually found old houses painted with graffiti.
Once a district characterized by crime, Getsemani, just south of the ancient walled fortress, has become “Cartagena’s hippest neighborhood and one of Latin America’s newest hotspots”, with plazas that were once the scene of drug dealing being reclaimed and old buildings being turned into boutique hotels.[36]

The Bocagrande (Big Mouth) is an area known for its skyscrapers. The area contains the bulk of the city’s tourist facilities, such as hotels, shops, restaurants, nightclubs and art galleries. It is located between Cartagena Bay to the east and the Caribbean Sea to the west, and includes the two neighborhoods of El Laguito (The Little Lake) and Castillogrande (Big Castle). Bocagrande has long beaches and much commercial activity is found along Avenida San Martín (Saint Martin Avenue).

The beaches of Bocagrande, lying along the northern shore, are made of volcanic sand, which is slightly grayish in color. This makes the water appear muddy, though it is not. There are breakwaters about every 200 yards (180 m).[citation needed]

On the bay side of the peninsula of Bocagrande is a seawalk. In the center of the bay is a statue of the Virgin Mary. The Naval Base is also located in Bocagrande, looking at the Bay.